So, I said 300 gallons would be delivered yesterday? HA!

The fuel guy showed up with what he called a 'bazooka.' Since our whistle doesn't work, since there's no gauge (just a measuring stick), and since the tank is below ground, it's been tough to figure out how much oil we have left. They gave me a card last time. At 17 inches, I should have had about 170 gallons left on my 550 gallon tank.

Well, it took 478 gallons using the bazooka to judge when it was full. It's a long pipe that rises about 4 feet above ground. There's a hole at the end, kind of like on a flute, only the air comes in from that hole on the side as the oil slides down the tube and then it pushes the air through a small pipe to the top, where it whistles. That's what our bypass valve should do, but doesn't. Air does escape through it (so he kept it closed this time), but it doesn't whistle. When the whistle stops, the tank is full. This pipe hangs on the edge of the tank below, so there's no chance of overflow. He said it still won't be full to the 550 gallons, you can never get all the way full.

So apparently, where I thought I had an 80 gallon cushion ordering 300 gallons with no ability to determine the top of the tank easily, I actually had 180 gallons. Oops.

Why oops? Because you're not supposed to drop an oil tank below 1/4 full. You risk sludge getting into the fuel line. So I must have had only 70 gallons or so left. Good thing I didn't wait any longer, right?

Last night, the burner turned off before we went to bed. And Weatherdude had been home the last time it went out and he was pretty savvy about restarting it and troubleshooting it. Conclusion? Clogged oil filter and we don't have a spare on hand (we will, though, because he thinks he could change it himself). He was able to get it restarted and it ran intermittently through the night, but has pretty much kicked off at this point. And it's a balmy 25F outdoors (wish that were Celsius!) and 60F inside. But we're the first call of the day.

I insisted on getting oil before Weatherdude left town for 10 days. And now we know why. I wouldn't have known where the reset switch was or where the filter indicator was or anything about the burner. I would have been cold and making an emergency call instead of one this morning during working hours.

It's a good burner. Everyone says so. But frankly? The 40 year old horror at Walkabout Farm never, ever, ever kicked off. And I hardly ever had it serviced in 11 years. And everyone threw it looks of horror when we were selling. "It's so old!" "It has to be replaced!" Granted, it only pushed heat into the back bedrooms and was used lightly. This burner heats the hot water AND the two stages of the house, so it runs year round, at least for hot water. But still. Thank you, old-horror-of-a-furnace, for being reliable for 11 years. (In VA, the tank was above ground and it had a working gauge that I never let go below 1/4.)

Not on a farm any longer, but life continues to be...interesting.

I/we love this new house. Lots of windows, great view. But in certain temperature ranges, windows and skylights become a disadvantage. All I can say is, thankfully the thermostats are NOT in the high exposure areas. And thank goodness it's a small house, she says as 300 gallons of heating oil is about to be delivered on top of a 250 gallon delivery last fall that completely filled the huge tank.

So this summer, the view part of the house was rather hot, despite A/C. (Needed, a return in this part of the house.) And this winter, the view part of the house is rather cold (rather a cold one, this winter is) and a return won't help that as it's baseboard heat. What would help is getting the fireplace fixed with a woodstove insert, but that has to wait for the needed funds to show up in our reserves. So with this frigid weather so many of us are enjoying from the Arctic, it's 50-something in the kitchen when we get up in the morning. Right now, at 9:30AM, it's a balmy 64F at my desk here.

In the meantime, if the weather would just get a wee bit warmer and stay warmer, the contractor might be able to backfill the big hole for the foundation on the addition and get started on framing the main part of it, a place for me with a view.

Because this house is all about the view.

It's felt like 2 years since I last blogged, not one. That says something about the past year, which was horrendous on a personal level. Moving isn't easy and a six-month separation is even less fun. That we've been married for 32 years and that I was a military wife means I knew it was survivable, but it didn't make things easier. After all, it's been over 15 years since Major Weatherdude dropped the Major.

That whole year of walking was about eating right and exercising and losing weight. And for 3 months I worked hard and dropped it. Then the announcement of the move to NY. All that weight came back on over the next 12 months and a couple more crept on, moving me back up toward my watermark high weight, a place I never want to see again in my life. Throughout all of that, I kept registering with "my fitness pal." That was where I'd logged my walking. Sometimes I logged my weight, sometimes my exercise, sometimes my food. Sometimes I didn't log in. Through all of that, one friend stayed with me. We haven't seen each other in years, our lives went in different directions after overlapping for maybe two years. But there she was, day after day. Did she log in every day? No. But when I did, she cheered me on. And when she did, I cheered her on. Our chatter is silly and serious and openly honest about our diet du jour.

Well, really what happened recently was we both found ourselves disgusted by a lack of motivation and progress about 2 months ago. At the same time, no less. So here we are, on different management programs of our own devising, but still cheering each other on. And we're both successful. I managed to lose before each holiday and then gain part of it and then get it back off again. She's managed to do the same, but losing more. (I tell myself she's 15 years younger, yes, that's the reason.)

This morning I'm celebrating that I've lost weight and that she's lost weight and that we're still at it. Back when I was using AOL, before there was open access to the worldwide web, the community was crucial to a lot of people who live isolated, physically or mentally. Weight Watchers also emphasized that working with someone else could be the key to success. It amazes me that it's two decades later and my online community is still helping me, still providing needed support. Not a lot, just that light touch of 'you're not alone.'

So thanks, Mrs T. Thank you for being there, all these years later, thanks for hanging out with me in a free weight-loss community. (No wonder my WW stock is tanking...)

Final count being verified from printouts...

lovely day today, btw. Made it to 70 here and balmy breeze from the southwest.

Oh the suspense. It's killing moi.

It's going to be a squeaker with the weather we've had recently. Last year was so much milder at this time. I couldn't walk on Saturday, so today was 4 miles up into Paeonian Springs and back. I don't often do that kind of mileage, but I needed to cut the pressure from Mon and Tues. Tues the car goes to the shop because Thurs I leave for the closing on the new house. So even if something comes up (like school being delayed tomorrow and realtors coming by to talk about the house being sold), I'm close. Really close.

Today, though. While I thought they should have cleared the snow from the trail and that made footing occasionally tricky, in general the conditions were optimal. Lots of sun, very little wind, and about 30 degrees F.

Thank you commenters and encouragers. I'll go through and respond when this is over. The positive thoughts have helped. Then there's my friend to the south who just told me to get out there and do it. Much appreciated as it led to my four miles today.

I managed to get in 2 miles before the snow started again. it's still very cold, as most of you know. But while there wasn't sun, there also wasn't wind at that point.

Here's the view from our new house across Long Island Sound. Brrrr! as my realtor wrote when she sent it. 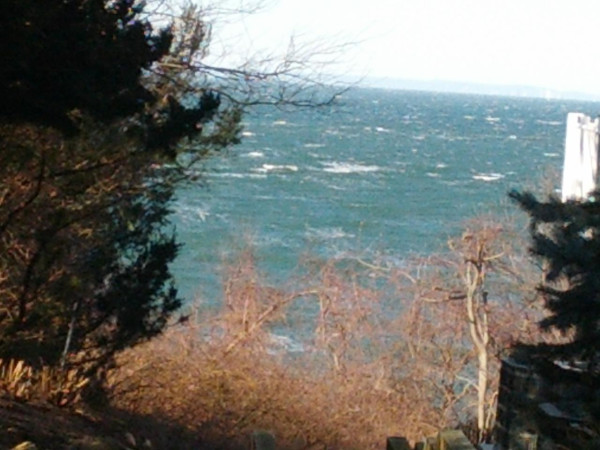 And may I just say that it's quite cold out there, especially without sun.

Miles should count double when it's 20 degrees F outside and there's wind.