I either skip only one day or I walk longer than 2 miles at a time. Weather has been an issue...it's cold or windy or both.

Three weeks prior to Jan 30, I was in a writing weekend and finding it painful to sit for any length of time. I was told I had a muscle knot above one of my knees. I was in pain from doing nothing and had no idea how to undo that. I received some advice about heat and advil. I knew enough to take things very slowly, if I did try to exercise again.

I set a goal of 10 miles a week, assuming my legs could hold out. I bought a good pair of walking shoes with a lot of bounce and cushion. I walked a bit slower than a 20 minute mile at first. And I was useless for anything else on my feet for the rest of the day. I would sit down and heat the leg for the rest of the day. (Both legs have had issues, but one has atypical issues.) I would heat it in the shower with oodles of hot water. I would go to bed at night with that heating pad and a couple of advil. But mostly, I was off my feet the rest of that day.

I continued to walk and as of Feb 9, 2012, I tracked my walking in myfitnesspal online. I've printed out and totaled up my miles from time to time. Some days I can do more than 2 miles, most weeks I do more than 10 miles. And I pretty much walk in all weather.

I will stop right here and say that I've never done any kind of exercise consistently, day in, day out, for an entire year in my life. Let alone year two. This is mind-blowing for me.

I forced myself at first, but now I'm antsy if I don't walk. I love being out in the open air, in almost all weather. Wind off the Short Hill range in winter being the exception. I walk in rain, though I'll try to schedule around it. And I like to do this every day, if I can. I find my brain does that thing now where it clicks into another zone as I set out, it works through things, either problems or writing things. My mother was an all-weather walker. So when I walk in the rain, she's there with me. I get why she walked. It's cheaper than therapy.

I walked through busy season with only a few hiccups where I simply didn't have time. I walked around Chicago while at Worldcon. I walked on vacations. I walked in Virginia humidity and I got out of bed at 6am to walk in the Tucson desert in June. At first I was walking a specific route, adding mileage. But now it doesn't matter. It's the walk that matters, the air, the relative silence so I can hear my thoughts. (Though walks go faster with company!)

I talked to a friend this summer about my walking. He was hiking the Appalachian Trail. He wasn't in shape when he started and he was overweight. But he was an experienced hiker and camper. We agreed that we had two choices: sit and wait to die, letting our bodies get worse; or get up off our butts and walk anyway, using Advil or something to make it bearable. (He was taking a lot more painkillers than I was, for very good reasons.)

Nothing is worse after a year of this. Some things are better, some are the same. Overall, the experiment is a success...it was a success at six months. And the longer I do it, the more it becomes habit for me. I still ache. I still take advil. I still have issues in my legs, but now I know most of them are associated with letting my lower back stiffen up and pinch a nerve. I don't need heat much, my muscle tone is better, and I've worn out two pairs of walking shoes. And I don't have to stay off my feet the rest of the day after my walk.

So as I celebrate reaching the one year point, I hope any readers will celebrate with me, cheer me on to break 600 by Jan 30th, the one year anniversary.

I miss these days... 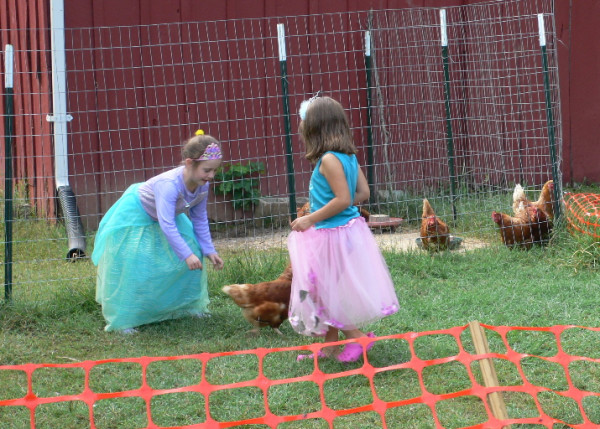 Walkabout was the only hen bold enough to walk in and down the hall, but then she was something of a genius-chicken. 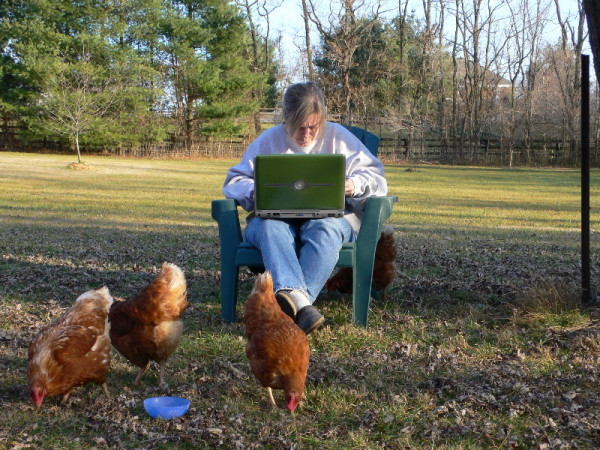 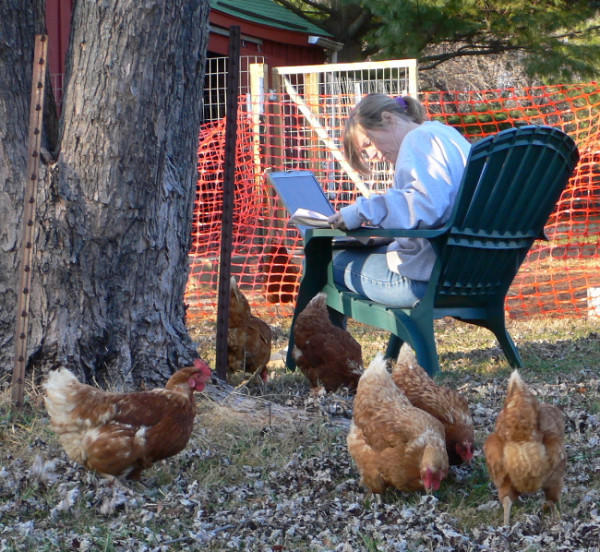 I call this St. Dude of the Chickens. 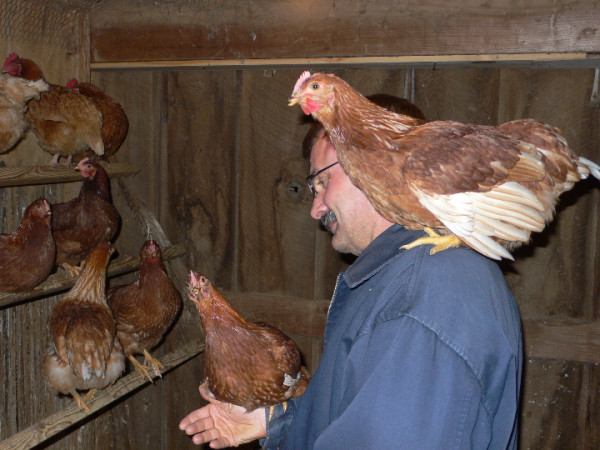 Weatherdude wanted to begin killing off the rat population before he leaves at the end of the month. And that, my friends, is a very gross process. Cats are far less gross. Another rat bit the dust on Sat via cat...the Dude found PD nibbling on it. Then on Sunday, WD put down poison and traps. Monday night he cleaned up four dead rats. This morning, I saw PD gnawing on one in the paddock (poisoned, OMG UGH) and then found another in the coop, which is locked to the cats, but baited for the rats. So that's a total of seven rats since the chickens were removed. And we haven't even torn up the coop floor yet. My belief is that each owner has removed livestock to kill rats before selling. The original owners who dropped by in Sept told WD that they had had rats, too. My other belief is that a farm with feed and livestock also has rats.

We've heard of many ways rats can and can't be killed. In the desert, you poison their water supply. End of rats. But here, we annoyed them for the most part, with smoke bombs. We couldn't put down poison because of chickens and cats and children. They weren't interested in traps or bait when there was a plentiful supply of chicken feed. Not that they got into the cans. They just ran around the chickens in the very safe, cat-proofed, hawk-proofed, fox-proofed run. Sigh.

We could see them doing this from the house. The chickens hated them and pecked at them. Rats would jump in the air when pecked, but weren't deterred from the feed. Babies to feed, no doubt.

We are very pro animal around here. We have a resident large opossum. We don't feed him, but there he is, living under the deck, stealing cat food when we forget to bring it in at dusk. This year's skunk unfortunately wandered a bit too far and became road kill about a week ao. The skunk's markings were so unusual, we knew it was "our" skunk. No spraying, but the garage has smelled skunky for several weeks. Yet another reason not to leave cat food out.

But rats just multiply. One lovely Templeton rat would not be so bad, much like the bachelor woodchuck. But a colony? Under the coop? Running about boldly? One has to draw the line somewhere.

You do NOT want me to post photos of the dead rats, right? 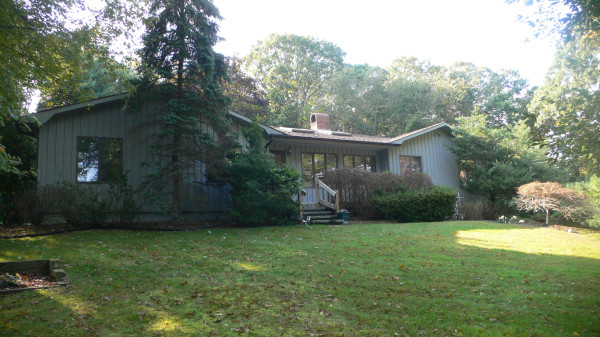